Online Bible by Logos
Add this to your site!

Apologetics and Evangelism: Roman Catholicism part 1 (I've been neglecting this for too long)

Imagine that you (as I was) were driving through Green Bay, WI and decided to take an alternate route in order to become more familiar with the layout of the city when you stumbled upon this sight: 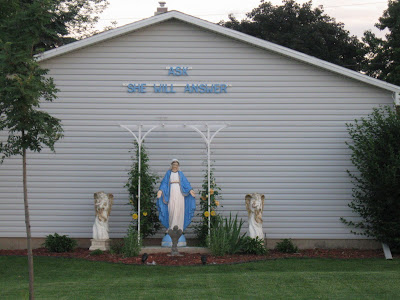 ------------------------------------>If you’re anything like me, you would be very disappointed/enraged/distraught/saddened by this spectacle. You would probably share the same sense of provokedness in your spirit as Paul did when he was walking through Athens amidst all of the idols that were being worshiped.

This picture, by the way, was taken of the side of someone's house.

I have been involved in quite a bit of study and interaction with Roman Catholics (RC’s) in the last 5 years or so and I have had quite a burden for them mainly due to the fact that my in-laws are RC’s. I have learned much about the way in which RC’s understand the Gospel (or misunderstand), and I have spent a lot of time on discussion forums discussing this and other issues with them.

Lately, I haven’t given much time or thought to the subject, but when I see disappointing examples like the one in this picture I have to ask myself why I’ve not been taking the time to evangelize these lost and deceived people. I have spent much time in a priest by the name of Sean’s house attempting to reason with him, but when he realized that the reason I was attempting to convince him of the truth of substitutionary atonement was because I didn’t believe him to be a Christian he told me not to come back. This greatly disturbed me, but it’s in the Lord’s hands, not mine. In the future, I hope to have some more interaction with him, and I pray that the Lord will reveal to him that I deeply care for him and am concerned for his soul. Nevertheless, I would like to spend some time on some future posts to explore the topic of Roman Catholicism and how to approach those infected by the false teaching contained therein.

Without getting into any specific issues in this post, I would just like to lay out some guidelines that I think to be helpful when approaching RC’s with the Gospel:


Well, I hope to add to this soon, and I hope to cover as many areas as possible by the time I’m finished. Until then, find a Roman Catholic and tell ‘em about the Jesus Who saves AND keeps to the very end (John 6:39).

Posted by Michael.Gabriel at 8:28 PM 5 comments:

Apologetics and Evangelism: JW's side note

I just wanted to make sure that everyone who reads this is clear on the fact that my goal in studying and practicing apologetics is evangelism. I think that I've been pretty clear on it, but I have received a comment on another post that indicates that others think that I shouldn't believe in evangelizing others based on my theology (the theology that I believe is consistently Biblical).

With that being said, I wanted to ask for some input from some more well rounded readers. While witnessing to the JW's at the Kingdom Hall last week, my focus was to understand what they believed and to approach them in the wisest possible way with the Gospel. I found that they would answer correctly when I asked what it takes to become a part of Jehovah's family and to take part in the life to come (more or less). I decided to approach them by pointing out that they can have a real, solid faith in this one whom they call Jesus Christ, but that if their faith was in the wrong Jesus Christ (they believe that Jesus is the alter-ego of Michael the archangel) they were lost in their sins. I attempted to inform them that for them to say that they believed in a Jesus Christ who is actually Michael the archangel then they are about as well off as I would be if I said my faith was in a Jesus who, in my mind, was actually John Fieck (my friend who just happened to be standing there at the moment).

I know that it's pretty evident by my previous posts that I'm not the most tactful fellow, so I wonder if anyone can contribute a suggestion as to how I can most tactfully inform them of this massive detail. I would like to be able to approach them with these facts without being offensive because the Gospel is offensive enough without my foot-in-mouth syndrome getting in the way of the perfectly pure, Spirit-designed offense. So, would anyone like to inform me of my flawed ways and how you would correct them?
Posted by Michael.Gabriel at 1:16 AM 4 comments:

I recently paid a visit to the local Kingdom Hall of Jehovah's Witnesses. It was quite interesting. It actually reminded me of some old sales meetings that I used to attend when I sold CUTCO knives (which are the best ever). Thay did some role-playing in preparation for the front door visits and when speaking to people in the workplace. It was not what I expected, but in hindsight I guess it shoud have been. A few of the people from the Kingdom Hall actually stood up to speak and were given feedback by one of the more experienced JW's. I have to say, this type of preparation puts many (if not most) of our churches to shame. I won't say anything more about that.

The reason for my visit (on which I was accompanied by my two friends: John and Enric) was because I have been visited a couple of times by JW's, and the last time (last Tuesday) one of them told me where he attended. My goal was to be an open witness because I was told that it was a question and answer time. It wasn't, though. We had to endure the whole "service" before we were able to interact with the people. By God's grace, we had the opportunity to witness to several people.

I have noticed in my more recent dealings with these folks that they are apt to use Proverbs 8 as evidence for Christ's lack of eternality. They assert that Christ is who is being referred to as wisdom in this passage. They say that since this wisdom speaks of herself (wisdom refers to herself in the feminine) as being "produced" (v. 23 New World Translation=NWT) and "brought forth as with labor pains" (v. 24 NWT), then Christ was a merely a creation of God who was "beside" God (v. 30) during the creation of everything else.

There are a couple problems with this theory of theirs. First, there is no other place in Scripture, to my knowledge, which lends support for this view. I appreciate typology in the OT referring to Christ, but I think that since there are no explicit explanations of this passage as referring to Christ then we should be careful how far we take this. Second (and adding to the first), wisdom is said to "dwell with prudence" (v. 12 NWT). Does this mean that Jesus has a sister named Prudence? Wisdom is also referred to as a she in this passage. I know that that isn't the strongest argument, but no one is going to agree to the idea that Christ is a feminine being no matter how much our post-modern culture tries.

I think that Proverbs 8 needs to be stretched pretty far in order to apply it fully to Christ. Sure, wisdom could be some kind of picture of Christ as the ultimate example of wisdom displayed in history, but in order to fully apply a passage as a type we need more Scriptural interpretation than what is asserted by the JW's. For example, in Isaiah 6 we are told that Isaiah "got to see Jehovah" (v. 1 NWT). We are also told in John 1:18, "No man has seen God (notice the big G) at any time..." but "...the only begotten god (and the little g)..." If this is true, who did Isaiah see. The text says that he saw JEHOVAH. Well, in John 12:41 we are told by the inspired writer of Scripture that Isaiah was speaking of Christ. So if Isaiah said that He saw Jehovah and John, under the inspiration of the Holy Spirit, said that Isaiah was speaking of Christ, then we are safe in concluding that Christ is Jehovah. That is a safe way of interpreting unclear passages in the OT. Look to a confirmation of your theory by a NT writer.

If your JW friend has a problem seeing the connection between John 12 and Isaiah 6, tell him to take a look at the cross reference at verse 41 in John 12. It references Isaiah 6:1.
Posted by Michael.Gabriel at 1:01 AM No comments: